Mesquite flour offers yet another option for making gluten-free recipes using a type of flour which does not contain wheat or gluten. Mesquite has a long history of use, primarily as food by Native Americans. Its lengthy history of usage is similar to many alternative flours.

What Is Mesquite Flour?

Mesquite flour or meal is made from the ground pods of the mesquite tree. This spiny shrub or small tree is ubiquitous in the southwestern United States. It is extremely tolerant of varying soil conditions, including drought. In fact, its formidable nature can make it weedy or invasive in some areas.

The flour is dark beige in color, with a sweet, spicy-nutty flavor you might expect from a legume. The strongest tasting flours have a taste reminiscent of chocolate or cinnamon. In addition to the flour, the green pods of the tree can be boiled to make a tea or reduced to a syrup or molasses. Even wildlife enjoys its pleasant taste as a food source.

It has a long history of medicinal and folklore use for treating ailments as diverse as fever to stomach problems to eye infections. Though all parts of the plant are used for various purposes, only the pods are used for making this unique flour. 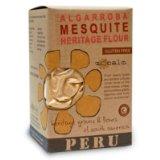 Like other gluten-free flours, mesquite flour offers a superior nutritional value to regular white flour. A 1/4-cup serving contains 137 calories, which is slightly higher than the 114 calories for white, all-purpose flour. The flour is high in iron and calcium. It also contains high amounts of protein and fiber, while boasting very little fat or cholesterol.

Yet, unlike white flour, it has a low glycemic index. The glycemic index measures how quickly sugar from different foods gets into your bloodstream. If you have issues with keeping your blood sugar stable, this flour can offer a way for you to prepare foods which will not cause blood glucose spikes. The combination of high fiber and relatively low carbohydrates make mesquite flour a possible alternative for diabetics and those suffering from reactive hypoglycemia.

You will find mesquite meal is more expensive than other types of gluten-free flour. In Arizona, for example, harvest is restricted and the amount which is salvaged is recorded, according to the U.S. Department of Agriculture. Due to this, you may want to consider using mesquite flour in combination with other flours.

As you may expect, the flour will impart a taste to your gluten-free recipes, which may limit its use in the kitchen. However, the distinctive mesquite taste will lend a nice flavor to meals featuring chicken, pork, or beef. You can also use it give a smoky essence to vegetable side dishes, breads, and soups.

The characteristics of the flour may vary with the manufacturer depending upon the variety of mesquite harvested and preparation methods. You will also find it is coarser in texture than other types of gluten-free flours such as soy or white rice flour.

Given its unique characteristics, you can cook with mesquite flour in several ways, either as a gluten-free flour substitute or as a spice. Like other flours such as coconut flour, mesquite meal will absorb some liquid in your recipes for which you will need to compensate.

The flour has a stronger flavor when compared to other types of gluten-free flour such as white rice or tapioca flours. You may want to experiment with your recipes using mesquite meal. A mere two tablespoons per cup of dry ingredients will unveil its unique taste.

Recipes using this flour are diverse. A few you may consider trying include:

You should store your unused flour in an airtight container in a cool, dry place for optimal freshness. Since you may likely use only a small amount of flour in your recipes, you may find it best to buy mesquite meal in smaller quantities.

Mesquite flour offers another opportunity to experiment and explore the gluten-free options in your kitchen. Its unique taste will add something special and perhaps unexpected to your recipes. It is sure to be a pleasant surprise for your taste buds.