Arrowroot flour or starch is a common ingredient in gluten-free cooking. It is derived from a large perennial herb that grows in rainforest-type climates. While originally found in the West Indies, today it grows naturally in Florida and is cultivated in other countries like East and South Africa, Australia and Southeast Asia. The roots of this plant are harvested when the plant is about 20-years-old. After they are cleaned and the paper-like scale is removed, the root is washed again, and beaten into pulp which secretes a milky liquid. The liquid is strained and the starch settles in the bottom as an insoluble powder which is dried.

Arrowroot can replace flour or cornstarch as a thickener and serve as a substitute for flour in baked goods.

One tablespoon of arrowroot flour can be used to replace two tablespoons of all-purpose flour or one tablespoon of cornstarch in recipes. It can be used to thicken soups, gravies and sauces, but it thickens at a lower temperature than cornstarch. When using arrowroot as a thickening agent, it should be mixed with a cool liquid and added to the recipe when it is almost done cooking because overcooking can destroy the gelling properties.

While arrowroot makes a great thickener, it also makes a suitable flour in gluten-free baking because it fosters better binding in recipes for bread, pastries and cookies, and it has no taste. The use of arrowroot in baking is not new. The British and early Americans made cookies with it. Today, gluten-free arrowroot cookie recipes based on the settlers' original version of the Arrowroot Biscuit (cookie) have eliminated all gluten from the recipe.

Where to Purchase Arrowroot

In most cases arrowroot is sold as arrowroot flour or arrowroot starch. The consistency of these products is very similar to cornstarch and can be purchased in some major grocery chains as well as health food establishments. Some specialty stores sell the fresh whole root. It may be labeled arrowroot, Chinese potato or tse goo. 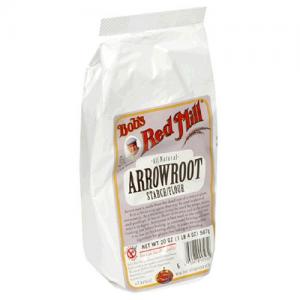 Not all arrowroot flour is 100% arrowroot. Anyone who must eat gluten-free knows to check labels, and it is no different when purchasing arrowroot. Some arrowroot flours also contain potato starch or other ingredients which are still gluten-free, but these additives can change how the arrowroot performs in a recipe and may change the nutritional properties of the product.

0
Comments
© 2006-2020 LoveToKnow, Corp., except where otherwise noted. All Rights Reserved.
Resources, Advice & Tips for Covid-19
Read More
What Is Arrowroot?