Living comfortably gluten-free involves both commitment and practice. Learning to order off a menu in most restaurants can be frustrating and not without risks, so your safest option has always been to create your own gluten-free kitchen and build an arsenal of tasty recipes. However, thanks to the active blogosphere community, cookbooks are almost passé! This is why authors like Erica Kerwien are generously taking the very best of their culinary knowledge and posting it on the World Wide Web at no charge to their readers.

Erica Kerwien is the author of ComfyBelly.com, a website committed to health-promoting recipes, many of which are comfortably gluten-free. Though neither she nor her son are actually celiac patients, Erica employs many gluten-free recipes and ingredients to abet the symptoms of her son's Crohn's disease. Erica is avidly committed to a healthy dietary philosophy that relies on fresh ingredients and whole foods alongside an omission of most processed and sugary foods.

LovetoKnow: Did you have a particular health journey that served to strengthen your opinions regarding healthy eating and food choices?

Erica Kerwien: I'm the kid that liked just about everything - including broccoli and brussel sprouts. And I baked and cooked at an early age. Over time though I've learned to balance my meals and intake depending on how I feel and what I'm doing (athletically and otherwise). A pivotal point came when one of my sons became very ill back in 2001, and I began to try to figure out how to heal him. When I realized that Western medicine didn't have any great solutions (as of yet), I started to dig deeper into how food and environment affect the human body, since it was something I could control, to some degree. While I don't think food alone can solve all our ills and problems, clean, nutrient-rich, ethically sourced food is essential for humans and animals.

LTK: Your recipes feature many gluten-free options, yet there is no mention on your site that you or anyone in your family suffers from celiac disease-induced gluten intolerance. You've also listed conditions such as Diabetes, Inflammatory Bowel Disorders and Crohn's as disorders that may benefit from healthier eating. In your experience have you seen persons with non-celiac related health issues respond well to a gluten-free diet?

EK: At one point, I was trying to figure out if certain foods triggered a reaction in my son's body, so I considered gluten as a possible source of his illness. He has been tested several times for Celiac Disease, and so far all tests have turned up negative. However, gluten (and other foods) can be more difficult to digest when you have an active digestive illness, so in my mind he was likely to feel better when giving his digestive system a break from certain foods (like gluten). To truly know if gluten is a problem for you, I suggest doing an elimination diet - take it out of your diet for at least a week and see how you feel. Then bring it back in moderation - and listen to your body.

LTK: It is possible to eat gluten-free, but not actually eat healthy. Your site mentions organic and whole foods as important dietary considerations. Could you please expand a little regarding why processed foods are not a favorite in your kitchen?

EK: I try to eat mostly fresh food (vs. processed) for a few reasons: the integrity of the food and the nutrients from it are as intact as possible, there are no unwanted ingredients and additives, and the food is more likely to have a lower level of environment toxins (when organic). 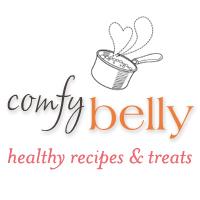 LTK: When cooking gluten-free what are some of your favorite alternatives to wheat flour?

EK: I don't aim to cook gluten-free as much as I reach for the food with the greatest positive impact on our health. Right now, I bake mostly with almond flour, coconut flour, and sometimes buckwheat and spelt (which is actually a form of wheat flour).

LTK: Not all gluten-free flour alternatives handle easily in the kitchen. Could you share with our readers any tips and tricks you may have learned regarding the complexities of gluten-free cooking?

EK: I prefer using as few ingredients as possible, which is why I like almond flour and coconut flour. They can be a bit more challenging to bake with because they don't behave the same way as all-purpose flour (what we're used to baking with). Once you've baked with them for a while, you do get the hang of it. And tried and true recipes help too.

LTK: If there was one recipe on your site that you could tout as your favorite, which one would it be?

EK: Well, this changes depending on the season and what we're eating a lot of, but I'd say the banana bread is a favorite for most of us. For my son, who has Crohn's, the chicken pot pie is his all-time favorite (comfort food).

ComfyBelly is a rich resource of fresh and inspired recipes. From comfort food to healthy doggie treats, even the smallest members of your family will benefit from Erica's expertise. However, if you are on a strict gluten-free elimination diet, be sure to avoid or to modify any spelt-containing recipes, as spelt does contain gluten.