Gluten intolerance and magnesium deficiencies may go hand in hand due to the malabsorption effects of celiac disease. Magnesium is important in so many bodily processes and a deficiency can mean serious consequences for the celiac patient or any individual who does not get adequate intake of this essential nutrient.

Magnesium participates in over 300 chemical reactions in the human body. It plays a role in the most fundamental of life processes including energy production and communication between cells. It is also a major structural component of bone, chromosomes and cell membranes.

Complex relationships exist between different nutrients in the body. Magnesium is no exception. According to the Linus Pauling Institute, low magnesium levels can, in turn, lead to low calcium levels. Low protein levels may also impact magnesium levels. These effects show the myriad of ways malabsorption can harm the human body and helps explain the wide range of symptoms celiac disease patients often suffer.

Individuals with chronic gastrointestinal issues like celiac disease patients are vulnerable to dietary deficiencies. Age is also a factor. As you age, magnesium absorption may decline and urinary excretion increase, explains the Institute of Medicine in their publication, Dietary Reference Intakes for Calcium, Phosphorus, Magnesium, Vitamin D, and Fluoride. Combined with the effects of gluten intolerance, the celiac disease patient faces a challenge in ensuring adequate intake.

Gluten intolerance and magnesium deficiencies can cause other symptoms that affect the celiac patient's quality of life.

Magnesium deficiencies may also influence your risk of asthma attacks. This nutrient acts as a muscle relaxer and may help prevent bronchospasm or constriction of airways typical of an asthma episode. Deficiencies may also increase the release of histamine, making your allergy symptoms worse. For the celiac disease patient, the growing list of possible consequences of magnesium deficiencies caused by gluten intolerance makes managing their gluten-free diet even more critical.

The recommended daily allowance for magnesium is 420 mg per day for adult men and 320 mg for women. Fortunately, you will find a wide range of available foods high in magnesium. Gluten-free sources include:

*Note that not all fortified cereals are gluten-free. General Mills produces five gluten-free breakfast cereals that can help meet nutrient needs. The Chex line of cereals including Rice and Corn Chex are also gluten-free. 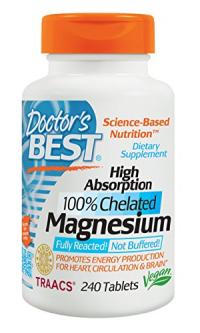 You can also take a magnesium supplement to meet your dietary needs. The body stores excess magnesium in the bone. There are several gluten-free brands of dietary supplements you can take. Hero Nutritionals and Pioneer Nutritional produce a full line of gluten-free products.

The celiac disease patient must exercise some caution when it comes to purchasing dietary supplements as some companies may use a gluten-containing product in the manufacturing process. The U.S. Food and Drug Administration permits the use of gluten-containing additives to drugs though a Citizen's Petition to change this inclusion with drugs and dietary supplements is pending.

The relationship between gluten intolerance and magnesium absorption helps explain the formidable obstacles the celiac disease patient faces when attempting to control the damage caused by gluten intolerance. Moreover, such nutrient deficiencies shed light on many of the secondary effects related to malabsorption.

While you may think the effects of celiac disease are confined to the gastrointestinal system, a magnesium deficiency can also impact other systems of the body include the nervous and respiratory systems. The risks boil down to the complex role magnesium plays in body function. For the gluten-intolerant individual with uncontrolled symptoms, the risks are even greater.

Check With Your Doctor

Before taking a supplement for migraines or the symptoms of celiac disease, it is important to seek the advice of your physician as self dosing may lead to an overdose of magnesium which can produce negative side effects.