Also known as love grass, Abyssinian love grass, or scientifically as Erogrostis tef, teff grass is an annual bunchgrass native to the central highlands of Ethiopia and Eritrea. Its high nutritional value and reliable cultivation have made it the most important grain crop in Ethiopia, where it is the main ingredient of injera, the country's national food.

Teff grass is gluten-free. As a result, celiac patients and other gluten-sensitive individuals will find this nutritious and highly adaptable grain to be a delightful alternative to wheat, barley, or rye.

Teff grass is not only the world's smallest grain, but also one of the most nutritious. Each teff seed is approximately 1/150 the size of a grain of wheat. This tiny size means the bulk of the grain is made up of mostly germ and bran, the most nutritious components of any grain. On average, one cup of uncooked teff provides the following nutritional benefits:

As a nutritional heavyweight, teff grass is gaining attention not only among the gluten-intolerant, but also health food enthusiasts, athletes and baby food manufacturers. 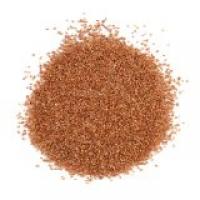 Teff is a versatile grain. The small grain size makes it ideal to cook whole like millet, or it can be ground into flour and used as a substitute for all or part of the wheat flour in many recipes. Possible applications include:

Teff is traditionally divided into three categories based on colour:

Despite the cultural and economic importance of teff in Ethiopia, it is still not widely cultivated elsewhere. Teff makes up about 25% of Ethiopia's cereal crops, but African countries such as Yemen, Kenya and Malawi, despite having similar nutritional and agricultural profiles, cultivate the grain only on a limited basis (Lost Crops of Africa, National Academies Press 1996.) Similarly, teff has long been cultivated in India and Australia, but chiefly as fodder for livestock.

The Future of Teff

According to Asia Food Journal, teff has become a noteworthy crop in The Netherlands both as a wheat substitute and as a nutritional supplement. At least one company is currently manufacturing teff-based sports supplements such as performance bars and energy gels. While most teff cultivation in the United States has focused on animal fodder, some small companies have capitalized on niche market possibilities.

Demand for teff as a nutritious, palatable wheat substitute is growing. As awareness of gluten sensitivity and related health issues increases, gluten-sensitive and health-conscious individuals are exploring the possibilities of alternative grains. A 2008 University of Nevada study concluded that, with seven distributors of teff flour and six teff product brands identified in the United States, the conditions for market growth were favorable. It appears that teff grass is primed to enter the mainstream.

Currently, teff is still a fringe market. Many health food stores, ethnic markets, and specialty sections of large grocers carry teff seed, flour, or packaged goods, but these products can be hard to find in smaller communities. If teff is not available to you locally, order online from Bob's Red Mill or The Teff Company.